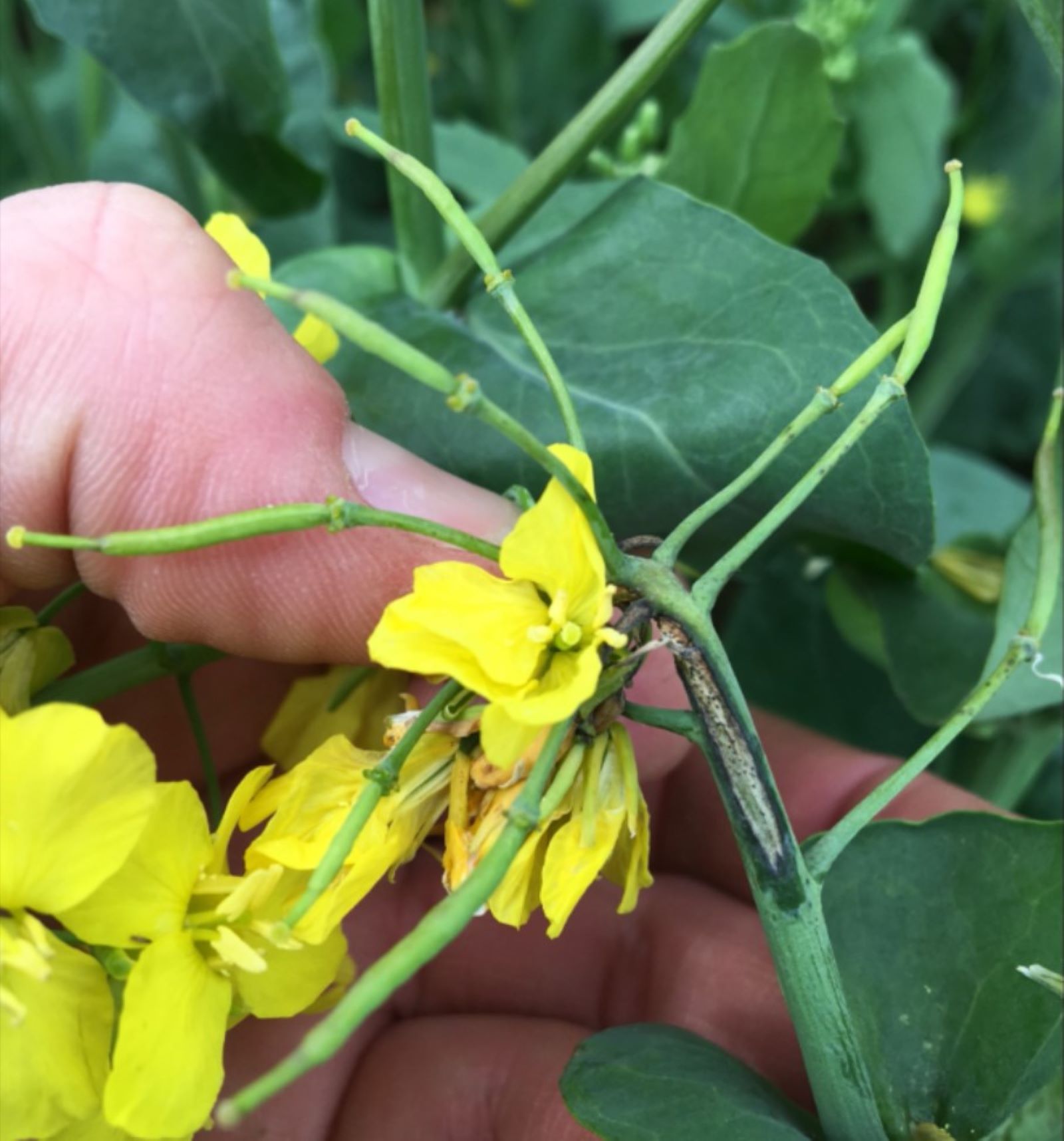 Impact of blackleg infection in the upper canopy of canola

Upper canopy infection (UCI) refers to a blackleg infection of the upper stem, branches, flowers, and pods of canola compared to conventional infections of the stem and lower leaves. This infection can cause significant yield reduction due to cankers on the stem and branch, restricting water and nutrient access and resulting in premature senescence of flowers, abortion of seeds and shattering of pods.

Significant rainfall over the 2021 growing season has been promising for many growers increasing the potential yield. On the other hand, the rainfall in areas has been so significant that it has caused detrimental waterlogging limiting yield potentials. High rainfall has also brought an increased fungal presence, increasing the risk of UCI. Rainfall releases blackleg pycnidiospores from lesions on the leaves and previous stubble into the air where they can travel and infect the upper regions of the crops canopy.

Key drivers determining the severity of upper canopy infection include the timing of flowering, climatic conditions of winter and spring and the plants genetic resistance to blackleg. An early flowering canola variety is at greater risk due to flowering in a time of the season where the conditions are more favourable for spreading spores. A drier finish to the season can increase the yield loss as the crop is under stress from blackleg infections which can limit water supply thus increasing seed abortion and pod shattering.

Climatic conditions favourable for blackleg increases reliance on varietal resistance to protect the crop during flowing and pod formation. Major gene resistance provides the best defence against UCI; however, blackleg has overcome some resistant varieties of canola because of increased prevalence of canola in crop rotations. Canola is being incorporated more frequently into the rotations, increasing blackleg populations due to limited temporal breaks between plantings.

To have continual canola gene resistance and ensure best protection for your crop, select canola varieties which have blackleg resistance in your region and continually rotate cultivars which have different resistant groups, this aims to limit the ability of blackleg to adapt and overcome. Additionally, consider fungicide applications; ensure the timing of the application is appropriate for maximised efficiency and remember to rotate fungicide groups to reduce the prevalence of blackleg’s resistance to fungicides.

Applying fungicides in the early flowering stage as an added form of protection against blackleg infection needs to be considered carefully, the economic benefit of applying will vary depending on the yield potential. The marginal benefits received in respect to increasing yield and managing blackleg must outweigh the activity costs of spraying the fungicide to justify the extra application.